skip to main | skip to sidebar

Posted by Psychologically speaking... at 4:40 AM 3 comments:

"babies are obviously more dangerous than we thought!"

Obviously, its the trailer of the movie "Baby's Day Out" (who would'nt know that?!).

Baby's Day Out is a comedy about the son of a very wealthy family who is abducted by bungling kidnappers and leads them on a merry chase around town and through the zoo. Baby Bink, as he is fondly called, has a nanny who constantly is reading him his favorite book, Baby's Day Out. When his mother decides it is time for Baby Bink's first portrait, she hires a photography studio to come to the mansion and do the job. However, the photographer's truck is stolen by three stupid thieves who pose as the photographer and his staff and kidnap Baby Bink for ransom. Fearless Baby Bink, once out of the protective mansion, escapes the foolish criminals and embarks on an adventure, visiting all the places from his favorite book and continually outsmarting the crooks. When his nanny sees the pattern left by the sightings of a "lone baby" and the wake of slapstick catastrophe that follows him, she realizes he is living his favorite adventure and leads the police and his parents right to him. Baby Bink then leads the police to the criminals, who are still in possession of his favorite book, or "boo", as he calls it.

Baby Bink first escapes his captors when one of them falls asleep reading him his book and the baby follows a pigeon out the window and over the rooftops to begin his adventure. There a sequence of scenes featuring the pigeon first sitting on a window ledge, then perched on a rooftop skylight, and then on the edge of a plank joining two rooftops. Other pigeons are seen in a shot of the billboard that will eventually be the landmark Baby Bink recognizes to capture the thieves. These scenes were shot in cuts and when put together with the shots of Baby Bink crawling after it, give the appearance that the baby is following the pigeon. All of these scenes were shot on a sound stage using trained pigeons which responded to a trainer's clicker commands.

After Baby Bink gets on the "Big Blue Bus" as in his book, he goes into a department store, then into a taxi cab, and finally gets to the zoo. There is a shot of a giraffe in his habitat as background establishing the zoo location. Baby Bink makes his way into the monkey house and actually into the arms of a protective gorilla who acts as a bodyguard for the baby, further foiling the inept kidnappers. In this series of scenes there were some chimps in cages that were actually zoo habitats. The gorilla, however, was an actor in a gorilla suit.

Emotions start early.Infants are emotional beings right from birth. In fact, emotions are biologically based, and are built into children’s brains, and help them connect to caregivers. Human beings are truly born to feel!But when do children begin to feel emotions and what do they feel? Right from birth infants experience several basic or primary emotions. During the first six months of life, as the infant makes cognitive gains, these basic emotions develop into more sophisticated emotions. Thus, over time, a young child’s repertoire of emotions continues to grow.The primary emotions and their development during the first six months of life are mapped in the chart below.

At birth there are several basic emotions that infants experience. But over the course of the first six months of life, infants begin to experience more complex emotions. And with each passing year their emotional repertoire grows. For instance, two to three year old children begin to experience embarrassment, pride, shame and guilt.

Babies learn a lot by watching what you do and then trying it themselves. For example, babies love to copy your facial expressions. When you smile, babies try to smile too. If you stick your tongue out at a newborn, the baby will stick out his tongue in return. Researchers have found that babies as young as 42 minutes old will copy an adult who sticks out his tongue.

Every person your child watches might be teaching her something. Young children can watch and learn to imitate anybody they see. This includes family members, babysitters, neighbors, and even strangers.

Posted by Psychologically speaking... at 3:21 AM No comments:

You're a single sperm with the impossible task of fertilising the egg, it's your journey against 250 million competitors, will you be the one?

With the use animation (special effects) the video chronicled the journey of a mass of male gametes towards the lone egg in the depths of fallopian tubes, but there was a twist: the sperm that had accepted inside the egg is carrying a bunch of flowers (as if courting a girl).

Now, imagine this: the sperm storming and racing the mountain pass that is the vaginal canal, doing pitch battle against the numerous obstacles and defense forces guarding the female reproductive system, and navigating a course that seemingly works counter to the mission of the invaders towards a single, monumental, life-creating goal.

The germinal stage begins with conception, when the sperm and egg cell unite in one of the two fallopian tubes. The fertilized egg, known as a zygote, then moves toward the uterus, a journey that can take up to a week to complete. Cell division begins approximately 24 to 36 hours after conception. Cell division continues at a rapid rate and the cells then develop into what is known as a blastocyst. The blastocyst is made up of three laters: the ectoderm (which will become the skin and nervous system), the endoderm (which will become the digestive and respiratory systems), and the mesoderm (which will become the muscle and skeletal systems).Finally, the blastocyst arrives at the uterus and attached to the uterine wall, a process known as implantation.

Posted by Psychologically speaking... at 2:40 AM No comments: 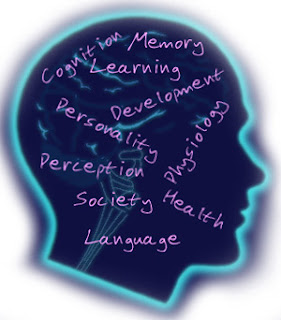 What Is Psychology?
One of the most common questions asked by students new to the study of psychology is "What is psychology?" Misperceptions created by popular media as well as the diverse careers paths of those holding psychology degrees have contributed this confusion. Psychology is both an applied and academic field that studies the human mind and behavior. Research in psychology seeks to understand and explain thought, emotion, and behavior. Applications of psychology include mental health treatment, performance enhancement, self-help, ergonomics, and many other areas affecting health and daily life.
Early Psychology
Psychology evolved out of both philosophy and biology. Such discussions of the two subjects date as far back as the early Greek thinkers such as Aristotle and Socrates. The word psychology is derived from the Greek word psyche, meaning 'soul' or 'mind.
Psychology Today
Today, psychologists prefer to use more objective scientific methods to understand, explain, and predict human behavior. Psychological studies are highly structured, beginning with a hypothesis that is then empirically tested. Psychology has two major areas of focus: academic psychology and applied psychology. Academic psychology focuses on the study of different sub-topics within psychology including personality psychology, social psychology, and developmental psychology.
Posted by Psychologically speaking... at 2:16 AM No comments:

Psychologically speaking...
Psychological knowledge is applied to various spheres of human activity including the family, education, employment, and the treatment of mental health problems. Psychology includes many sub-fields that span areas as diverse as human development, sports, health, industry, media and law. Psychology incorporates research from the social sciences, natural sciences, and humanities.